In our latest Product Focus, we take a look at a classic pocket square from our collection, Map Of The Battle Of Trafalgar. Published by William Blackwood and Sons in 1848.

Within the post, we explore the map and look into the history of the Battle of Trafalgar, one of the more famous naval battles in history, yet not everyone is aware of many of the key details. We also look at why this is such a versatile pocket square with its predominately white base, along with some of our favourite folds.

VIEW THE PRODUCT: MAP OF THE BATTLE OF TRAFALGAR Map Of The Battle Of Trafalgar is a published map by William Blackwood and Sons. It shows a pivotal moment in British naval history where Admiral Lord Nelson broke the French and Spanish line of ships. The map is beautifully illustrated, showing colour coded ships and what country they belonged to. In the lower right hand corner, we are shown where the battle took place. Indicating how close the British were to the coast of Spain and exactly where the battle took place.

Did you know? The British fleet was outnumbered by the allied fleet by 27 ships to 33 ships. The Battle of Trafalgar was one of the most decisive naval battles in history. A British fleet of ships spear headed by Horatio Nelson, our pocket square above, engaged with the Franco-Spanish fleet led by Pierre-Charles Villeneuve and Federico Gravina. The combined fleet of French and Spanish ships were released by Napoleon Bonaparte in his attempt to invade England, the plan was to take control of the English Channel and allow the Grande Armée a safe passage.

Villeneuve set sail from the south coast and encountered Nelson and his fleet of ships. Nelson had seen the 33 ship heavy force and decided to engage although at a disadvantage with his famous rallying cry "England expects that every man will do his duty!"

Nelson's battle plan was to combat the imbalance of ships by directing his fleet into the flank in an aim to isolate and break the opposition's forces into three parts. By attacking the flank, Nelsons aim was to create an individual ship vs ship battle to which he knew the British were superior. By also attacking the flank he knew he would have time to do much damage to his opponents before the ships in the vanguard had time to turn around and engage in the battle.

In theory, Nelson's plan was a gamble. Heading straight through the middle would mean the Spanish and French ships would have time to attack the bows of the British. In preparation for this, Nelson had his ships make all sail available for maximum speed. Nelson's knowledge of his opposition meant he he knew the inexperienced gunmen of the French and Spanish would then have trouble accurately targeting them.

Nelson was fatally wounded by a French sniper, after being told they were moments away from victory, Nelson replied with, “Now I am satisfied. Thank God I have done my duty.” Horatio Nelson died upon the HMS Victory. 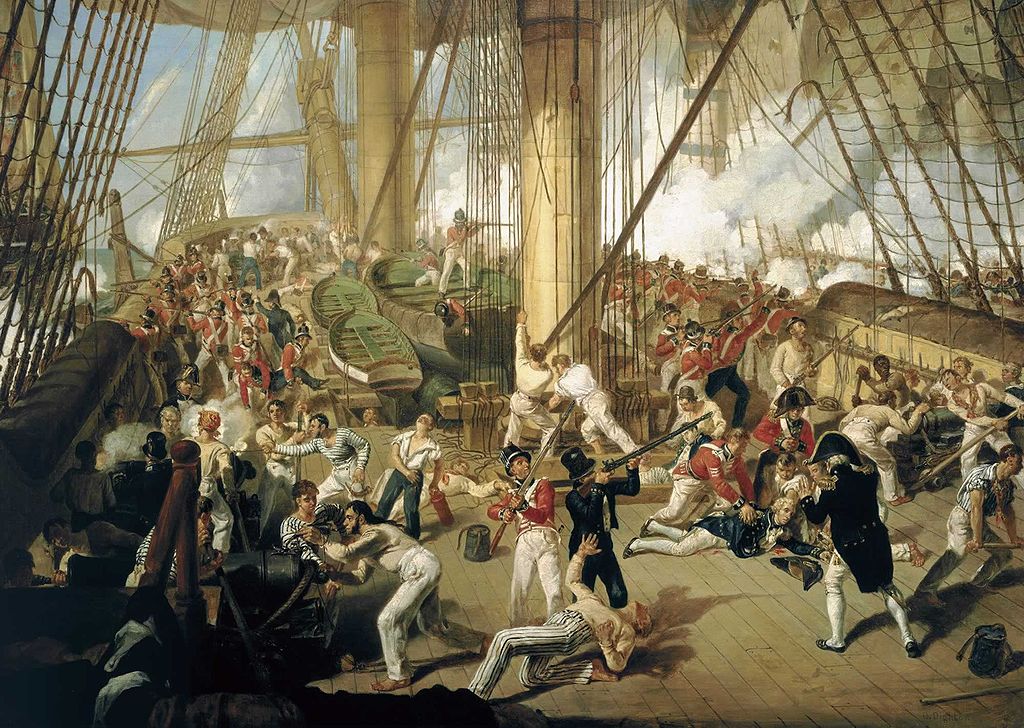 Victory at the Battle of Trafalgar meant Napoleon would never carry out his plans to invade Britain, while Nelson, who was seen as the saviour of the nation, was given a magnificent funeral at St. Pauls Cathedral. A monument was erected in the newly named Trafalgar Square in his honour, known as Nelson's Column. The Map Of The Battle Of Trafalgar provides a beautiful finish to a jacket due to its subtle touch of colours within the details of the ships and prominent border, creating a versatile look that works for almost all folds. The white background works perfectly for any occasion, as you can display more white for more formal events, or more of the colours in a more casual setting. 2. The Stairs Fold
The Stairs Fold is an elegant looking fold that although looks like it could be quite complex, is actually relatively simple to master and gives a very clean, crisp finish to your jacket.

View the Product: Map Of The Battle Of Trafalgar